This is the amazing (boring) story about Future Vision and the people behind the group.
Even though we have started many new groups, Future Vision was never dead.
It was just resting and collecting new energy.

It all began around 1983 when most of us got our first computer. The one and only: Commodore 64.
Some poor bastards bought an Amstrad or even Vic 20… Damn… 😉

Like most people, we used it for playing games and had no idea of what was going to happen in the near future.

At this time we found out that there were other things to do with our computer than just playing games.

That year Chain and a friend of him was playing around with a group called DEAD BEANS. Just for fun. Chain owned an Amstrad at the time.
The same year Eazy and his brother 7 11 was messing around with another group called SALAMI on C64. They made some weird shit in basic (hehe).

At that time Hazel meet them for the first time. And boy, Hazel was impressed. They actually owned a disk-drive for their C64! Damn.

In 1985 Eazy and Hazel created THE DANISH VIKINGS (TDV). Can’t remember that we actually made something and after a while, we decided to cancel this project as well (also we thought it was a pretty stupid name)!

FUTURE VISION (FTV) was born. It counted 4 members (Eazy, Hazel, Kontrol, Bigfoot) until the year of 1990 when we decided to rest for a while. In these 3 years, we managed to produce a lot of demos and shit.

We got a lot of response, which was really cool..

And we also had the time to hold a COPY PARTY which was a bit disappointing. But we got a few people to visit the party. About 15 or so. not much. At least one famous group at the time showed up (Jewels, represented with Pet). Because of some misunderstandings with the group ZONE 7 which we believed would help us with the party everything ended with a long war with ZONE 7. 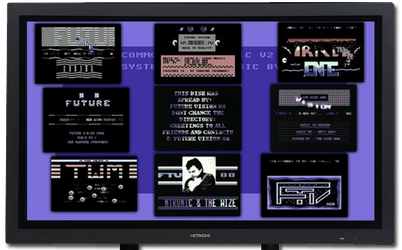 But when things seemed to look bad it suddenly changed… And yet again this old group would come back from the dead… Eazy and Hazel decided to bring FUTURE VISION (FTV) back to the scene again! At this time even Eazy had canceled his coding and entered the world of creating music. We managed to release a lot of music disks (Baby Coma 1-10) and a few demos (Pure Poison & Night and Day) on the Amiga.

In 1995 we started a new group which was supposed to be a sub division of Future Vision. CB4 was created (or so we thought). Eazy, Hazel and Chain decided to join the wild demo compo at THE PARTY 5 and we used a damn lot of time creating one of the funniest wild demos seen.

At THE PARTY 5, we contributed with our wild demo “CAN’T DANCE – the shit is fucked up”! It made a big laugh among the crowd.. Especially the part containing our insane cartoon with soccer players…

But at the party we also discovered that another group in Germany had the same name CB4, so we decided to change our group name… 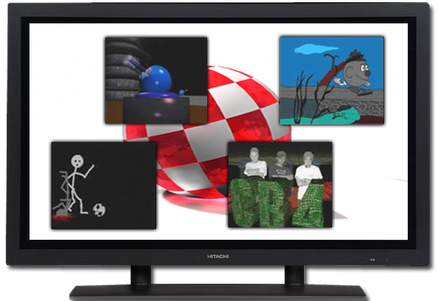 And we also made a contribution for the wild demo compo at THE PARTY 7 called “HARDCORE REALITY”.. We also manage to hold some small computer parties (Out Of Memory) and we had hoped to make them very serious. But at the last party where we had compo’s only half showed up. So we decided to cancel the project. Too bad though. 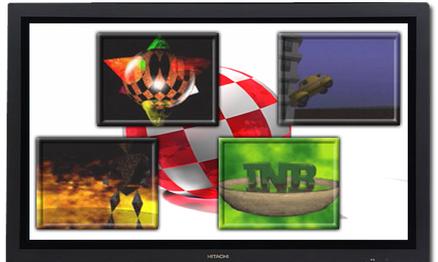 In 2000 Hazel and Chain made a little group called STATIC! They made a few small wild demos and manage to release 1 music disk “The Static Files” on Amiga.

The same year they canceled the project.

This site is born. We have talked about this for many years and at last, our web site is reality… What will happen in the future with this group? Only time will tell. After all… We are some old bastards and we’re not getting younger…

We got a new member this year. Nappe1 joined FTV and we welcome him aboard this crazy ride.

Our contribution to Meltdown was the animation called “Funky Legs“. It got the 3rd place.

We contributed with an animation demo called “First Contact” for Assembly 2006 which ended on a 6th place.

It is extremely quiet in FTV this year. However, Hazel teams up with Ziphoid and starts a new net-radio called: SceneSat Radio.

We won the Animation compo at TRSAC 2010 with the video: We Came To Party.

A 5th place in the Animation compo at TRSAC with “They Really Came to Party”.

We were represented at Revision with Hazel who got 5th place in Music Streaming with “The Key”.

And at TRSAC Hazel got a nice 2nd place in Music Streaming with “The Awesome Power of Nuclear Energy”.

A little “report” video was made with footage from Revision.

Hazel got 3rd place in the Music Streaming compo at TRSAC with his “The Lost Race – 1×1 – The First Evidence” track.

Hazel received a 5th place in Music Streaming compo at TRSAC with his “Planet 9 is Alive”.

Hazel got a 7th place in Acid Music compo at TRSAC with “Lake Acid (There is something down there)” and  got 3rd place in the Gabber Music  compo with "The Caravan Boogeyman drank all the Schnapps” and last but not least finally a 1st place in the Streaming Music Compo with "When the Sun is Gone".

In 1986 things began to move forward. Hazel, Eazy, and 7 11 started TEAM DENMARK. The group didn’t last very long but they actually manage to make a demo-disk. Even though the demos were pretty ugly they were of course VERY proud! 🙂

At the end of 1986, Eazy and Hazel started THE FAMOUS DUO (TFD) which actually was the REAL beginning of our work on The Scene.

Later on, Kontrol joined the team… At this time we cracked a few games and made a few demos. This was a big-time for us because we began to get responses to our work. 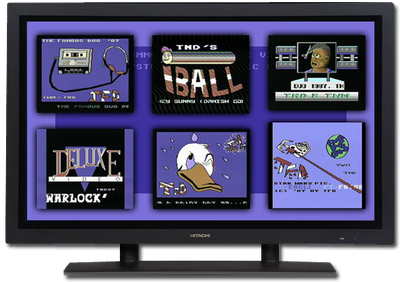 This year was total chaos.. Eazy & Kontrol wanted a break.

Eazy didn’t have much time for computers anyway. He had found a new hobby: Mixing with records. Eazy also attended the national championship in mix but due to a corrupted jury, he didn’t win (it was actually a scandal!).

At the same time, Hazel tried to start some groups that year but they were all a failure.

Shortly after Hazel tried once again with PROFILE. But well… U Know the rest.

This year was indeed strange. From being a coder on the C64 he decided to try out making music on the Amiga. Soon he completely stopped the coding and concentrated about music.

Later on in 1990, Hazel tried to make a new group. This time it was only about music. HOUSE NATION was born and a few music disks (Party Zone 1-3) on Amiga was released.

Eazy also joined the project, but not on the demo scene. We had big plans with this group. We hoped to create a music group and get a record contract. But even this attempt failed. 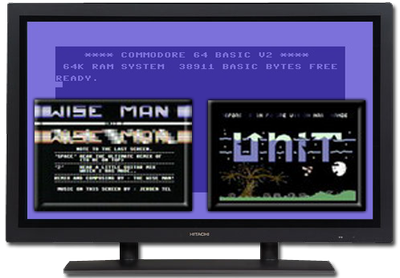 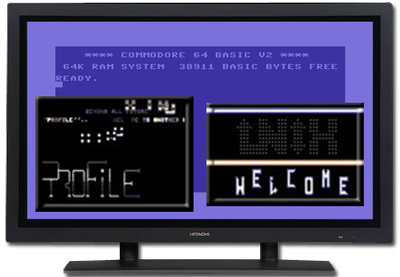 Eazy & Hazel went to the same school this year. Here they meet a really crazy dude (and I mean crazy..) But this dude was part of a group of people who arranged a concert in Aalborg called “Tachyphobia” (means fear of high speeds). And after he had heard some of our music he convinced us to perform live at the concert.

So… We had to think fast and figure out what we should call our “band”.

The name was “Psycho Trance” and our music was just as weird as our band name. The day came and we should perform live for the very first time. We were the first band on stage. To our surprise, it was a huge success. The audience went insane.

The Year was 1996 and we decided to change the name CB4 into INDUSTRIAL BROTHERS (INB) and after a while, we collected a few extra members. At our highest, we had 7 members (Eazy, Chain, Hazel, The Slayer, Sniper, Kontrol, Quadro) This group stopped to exist in 1999 but a lot of music disks (Cosmic Pollution 2-11) was released.

In the summer of 1996, Eazy and Hazel released their audio cd called “Insane in the brain”, which was released under the Industrial Brothers name.

In 1999 Hazel tried once more to start a new music group COLD FUSION.. Only one music disk was released “Shock Wave” on the Amiga.

The same year 1999 Hazel joined a group from Portugal called MISERY. But he only made one song for their music disk “Beginning Times” which was released on Amiga… The same year COLD FUSION was canceled and Hazel decided to take a break.

We started this year by visiting the “Meltdown 11” party in Denmark and joined the flash & music competition. It was a success. 2nd place in the flash compo and 1st place with Hazel in music compo.

We didn’t get the time to visit “Meltdown 12” this year… Now we have to wait for another year. Damn. Well. We have been considering visiting “Scene Event” next year.

We were at Scene Event 2005 this year. We got 4th place in the animation compo with “Demo Junkie“.

Hazel got the 5th place in the music compo with his “Can Dragons Really Fly?”

We also attended Meltdown 2005 and won the animation compo with our “This is not game” animation.

Hazel got 1st place in multi-channel-mod compo with “Drunken Noise” and a 2nd place in the MP3 compo with “Beyond The Sky“.

Not much is happening in FTV. Nappe1 contributes with an entry in the Freestyle Graphics entry at Assembly 2007.

Nappe1 has an entry in the Graphics Compo at Assembly 2009.
Hazel gets 5th place in music compo at TRSAC 2009.

Hazel got 6th place in the Music Streaming compo at TRSAC with his “Creating the Superduck (Duck’n’Bass Edit)”.

We got 7th place in the Animation/Wild compo at TRSAC with “More KUNG, Less FU”.

Hazels track “Too Many Balls to Handle” got 2nd place in Freestyle Music at Pixel Jam.

Hazel then repeated that at TRSAC with his “Why You Should Not Make Music When Zombies Ate Your Brain” track for the Music Streaming Compo.

Hazel ranked 2nd in Music Streaming compo at TRSAC with “Return of the Forgotten Grandmaster” and also got 4th place in the Acid Compo with “At the End of the Universe (They Listen to ACID)”.

Hazel got a 2nd place in Music Streaming compo at TRSAC with “Kung of FU (The Drunken Ninja)” and also grabbed the 4th place in the Acid compo with “Ashid vs Evil Deed”.